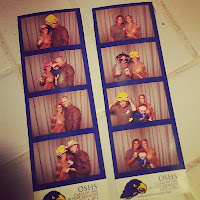 So I went to my high school reunion this past weekend.  And I feel like I should write something about it.  Something revolutionizing, something about how it was better or different than expected. Something.  Anything.  But honestly, I don’t really know what to write.  See it was pretty much what I expected. There were very few classmates there...way less than I expected. And it was simply people who knew each other in high school standing around talking to each other.  And for those who did not know each other, there were these random moments of “hey, how have you been” as they squinted at your chest hoping the name on the name tag would reveal more than the face staring at them.  Yes, everyone was cordial and yes everyone was polite. But just as I expected, what exactly do you talk about with someone you barely spoke to 20 years ago?

I was glad I had taken the husband, and I was excited we caught up with a friend from long ago and his wife. He was as cool as I had remembered and super easy to talk to. But I was really disappointed in all the faces I missed. There were so many classmates in the Facebook group who simply just didn't show. There’s a guy who plays dodge ball every week I really wanted to talk to. I wanted to hear stories from the girl whose brother I worked with who has an awesome adopted daughter. There’s the mom who I was good friends with who has a house full of adopted foster kids. I wanted to hear all these stories. But something about reunions, or at least this reunion, seems simply uninviting to most.

What I wonder is how do we get THOSE people to show up? Or are those people just not interested in those they never knew to begin with. Or is it that we are so disengaged because of what the Internet and social media provide that we feel we no longer need to gather face to face anymore.

I don’t know why I went. I think it was because I honestly thought more classmates would show. I thought I would get to hear in person the stories I have discovered along the way online. I would still love if some of those stories were shared. Maybe I’ll start and put one of mine together. One that tells someone a little more about who I am and what I stand for. Because who we are and what we stand for 20 years later can simply not be conveyed over three hours of drinks and mingling.

I would like to have had family activities. My family is my life now. And to share that, is to see who I am now.
Also, Sunday mornings are important and busy for us. So a Saturday early afternoon activity likely would have brought us to town.

I would have love to have seen you. Hoping things are going well!