deny the lie - a fight against the words 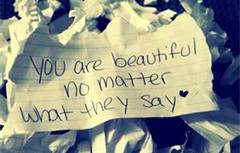 It’s just weird, he told me one night in reference to my deformed left hand. He had supposedly seen someone staring at it again and, as usual, was quick to point it out. He hated it when people stared; in his head he thought everyone was making fun of me. I don’t know why it mattered to him when it wasn’t him they were staring at. He saw me as incomplete...broken, and I suppose he felt this reflected badly on him.

Over time we started staying in more. We no longer attended concerts or movies and dinners out were always picked up and taken home. I became a prisoner of his insecurities, and I began to actually believe I wasn’t good enough.

I was born with a left hand that only has a thumb. But lucky for me I was raised as if nothing was different, and so I grew up believing I was just like everyone else. I may have learned to tie my shoes a little later than most kids and I never could cross the monkey bars, but my life was always still business as usual. I attended kindergarten through high school in the same school district so all my classmates had known me since we were little...and somewhere along the way they had stopped seeing me as different. So this boyfriend, this boy who saw me as incomplete, was my first encounter with someone who had an issue. Someone who was able to take the thing about me which I had no control over and use it like a knife to carve away at my confidence. He made me feel small and not quite right and, man, was he good at it.

Unfortunately not everyone is as lucky. Not everyone has the ability to pull themselves up after the sticks and stones and words have broken their inner being. But hopefully discussions like these will not only help those who have endured the harsh words that have shaped them, but also those who use these words without fully understanding the repercussions.

This post is part of Jennifer Luitwieler's link up #denythelie. I encourage you to share your own story and link up over at her blog. She's a great writer and a great person who seems to fight the good fight daily.

That is a cool story. I wonder what made you decide to walk away from him and the lie? How powerful. Thank you for sharing.