So we talked ourselves into footing the bill to get ourselves in the building Tuesday night to see Kanye West and Jay-Z.  I've always said I'd pay anything to see Jay-Z and while I didn't pay to see them down front, I did go along with the husband, sister #2 and the brother-in-law (BIL).  Below are some pictures but here's the story of the night.

We sat up top (b/c thats what the budget allowed) and its steep up there.  When you stand up you are literally hovering over the people's heads in front of you.  Before the show starts we see there are two very drunk guys behind us sitting next to two girls they are chatting up.  We don't think much of it and the show finally starts.

Not ten minutes in, one of the bitches sloshes her beer all over me and my sister.  My sister turns around and tells them they need to watch it.  They ignore her.  So I turn around to try and get the girl's attention and she literally swats my hand away.  At this point the sister and I are pissed.

They seem more interested in drinking and so they wander off at some point.  But over the course of the evening they wander back and forth continue to spill beer on us and our stuff.  Every time we yell at them and they look completely surprised like they have NO idea why we are mad and then try to get in our face an apologize.  At some point, we move down but that only works until they come back and wind up behind us yet again.

About two hours in the one girl has disappeared completely (presumably with some random guy she planned on screwing) but the other girl is back and finally falls backwards into our row and into the seat next to me.  I was about ready to kick her ass.  The guys behind us pull her back up and she again spills beer on my coat.

I look at the husband and say, there is about ready to be a fist fight.

I think he knew I was serious and physically moves me over and proceeds to yell at the girl and the guy she is now with.  They act completely surprised...AGAIN...that we are yelling at them.  The way I see it, they were lucky we had been so understanding considering  both me and my sister had beer on us and all of our coats were covered in beer.  Your welcome for us not getting you kicked out, girls who were young enough to be my daughter. 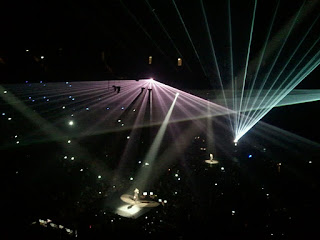 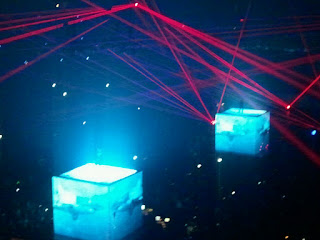