adventures in mexico part 2: you can’t take us anywhere

Our accommodations in Mexico came in the form of a room at a resort (courtesy of a sister-in-law w/ a timeshare) which included a kitchen. So on our way to the resort we stopped at Costco to stock up for the week (yes it’s EXACTLY the same as any you’ve been in…but with an ocean view which somehow made it better).

They should have known we were gonna be trouble when they saw us roll up. We arrive with luggage for 4, food for a week, 2 cases of corona and 3 bottles of liquor. I was put in charge of manning the bottles (so they wouldn't get broken) and so I made my grand entrance with a bottle of absolut in one hand and a bottle of tequila in the other (that’s right I like to keep my status as a lush on the DL).

Once we got to the room, the first matter of business was getting all said beer and liquor into the fridge. The guys made quick work of putting the beer in the fridge and the liquor in the freezer but they failed to see this on the front of the fridge:

﻿﻿
We therefore proceeded to commit what could only be called the 'world’s worst party foul' as I heard the question “do you want a lime cut….son of a bitch!” followed by the sound of half our bottles of beer sliding onto the floor. Housekeeping arrived to find two guys with bleeding toes and so much glass she had to call for back up.

An hour after that we proceed to get in trouble down on the beach because we wandered too far past the 'No Swimming' signs: 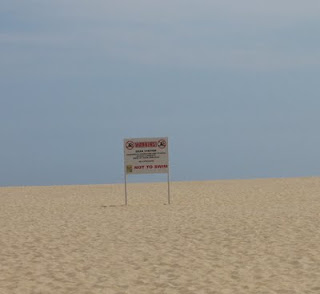 We were not so kindly told it was “muy peligroso” as we were escorted to a “safer” spot farther up the beach.

I’m not sure Mexico is going to invite us back any time soon. Tweet
Posted by Word Girl at 3:59 PM 0 comments

1.  An evening with the Bailey clan...bedtime and all.

3. Peg the printer repair lady.  She was in the office twice, looked confused the entire time she was there (both times) and the printer is STILL broke.  But god she made me laugh. 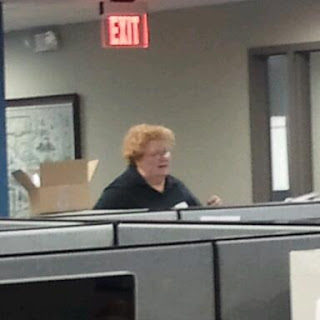 4.  Spending time with this one.  I'm pretty sure this was a self picture she took herself when I wasn't looking. 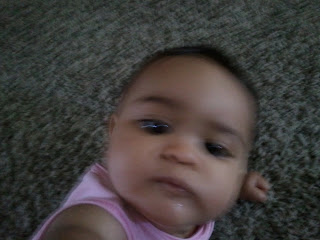 5. Justin Timberlake on SNL.  He rocks it every time. Tweet
Posted by Word Girl at 10:58 PM 0 comments

The husband and I went to Mexico a few weeks ago. We traveled without phones or computers (yup, I had withdrawal) so I couldn’t blog as I went. And now there are too many stories for one blog…so you’re gonna get them in installments amongst my other random blogs.

Our adventure began at KCI early Saturday morning. This was the first time the husband and I had traveled via air since all the TSA hoopla and I had also just read a blog post of Will Wheaton’s (check out his blog http://wilwheaton.typepad.com/ sometime) concerning his invasive (and maybe sueable) pat down he had received in the Seattle airport. So I was ready to see what all the talk was about. The two of us slid through security just fine but then proceeded to sit and watch the not so lucky. We never did determine WHY they were pulling certain people aside (im sure some would scream profiling) but we DID decide that the pat downs are indeed invasive. Pants were unbuttoned, shirts were untucked, the women were felt up over and under and in between everything, and there’s no way the TSA agents didn’t know exactly which way the guys hung after all was said and done. These travelers were at least owed dinner first…instead they simply gathered their shoes and belts and took what could only be considered the airport walk of shame. Tweet
Posted by Word Girl at 9:06 PM 0 comments

the tribe has spoken


Being laid off burst my bubble of the promise land I heard about throughout college and made me feel completely worthless. I came out of college thinking I was gonna have this great career where I would continue to make more and more money and that money was gonna make me happy. And then that dream was pulled out from under me in an instant on a Thursday morning in January. And it made me realize that dream doesn’t and can’t exist anymore. I realized now all I could do was figure out how to just stay employed and exist (safely and quietly) somewhere in the middle. And try and be happy THERE.

I’ve fallen into someplace like that now but I still get all tripped up in the whole thing. I start these wallowing conversations with the husband trying to figure out what happened, why it happened and who was responsible. The other night I finally asked him, “Did I not play the game right? Should I have done something differently?” (I ask these questions b/c I think I’m terrified it will happen again). And my very laid back, blue collar working husband says to me, “I think you were fantastic at playing the game. But you have to accept the fact the tribe just spoke too soon. And you have to be okay with that.”

Now, while I haven’t decided whether that analogy is genius or whether it just means we watch too much tv…I’m going to go with genius for now. Because he’s right. I have to accept I played the best way I knew how and that I wouldn’t have had it any other way. I want to be the player like Colby who played the game his way. He was the guy who wanted to win up against another great player. He took an equal player to the end and ultimately lost. But he had no regrets.

So I can’t be mad or upset at those who played a different game to stay where they are. I didn’t want to play that strategy. I’m okay that me being me and me speaking my mind and me never standing down didn’t get me as far in the game as I had hoped. Because in the end I can say I still played MY game and for that I’ll never be sorry. Tweet
Posted by Word Girl at 9:13 PM 0 comments