the women we come from

Growing up, the women who raise you are the only role models you know. You have mothers or grandmothers (or both) you live with, who run your life, who show you how the world works. And you don't know any better. You think what they show you is right...you assume their perspectives and opinions are what's right...how it all works. You grow up into the woman you think you should be. Then you find yourself at 36 and you start to realize where you came from isn't what you thought it was. These women didn't have it all figured out. Much to your dismay they didn't or don't actually know what the hell they are doing. They were simply making it all up as they went...and they may have fucked it up along the way. And now you find yourself on a completely course from how their world played out and they no longer get you. You have found the independent person in yourself while they have never lived without a parent in the home. You have a lot more education and you now have conversations with them where they no longer know what you're talking about. You argue a case and they point out how sometimes you just have to put up with shit. You sit in a parking lot defending why you don't take shit off people and they give you stories of abuse and wrongdoings and tell you that yes you do have to take shit off people. And you look at them and go I don't want to be that person who thinks they just have to take the shit...it can be different. And you suddenly realize the woman you came from is just a person...a person who never had it all figured out...a person you no longer want to be like. Tweet
Posted by Word Girl at 4:21 PM 0 comments 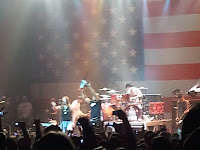 DMC with a chainsaw 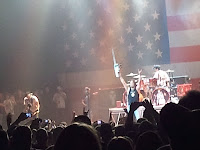 Jesse with a chainsaw 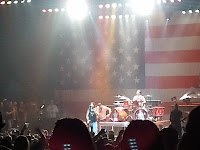 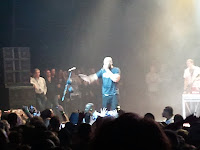 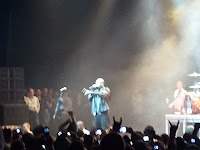 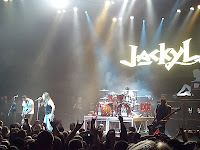 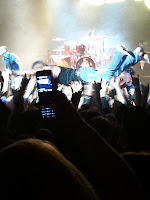 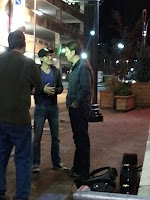 Mr. Grumpy Pants and Captain Energy seem to think they dont need to wear coats and its really starting to annoy me. My problem started when i bought them fleece jackets at walmart a few weeks ago. They were like $7.00. and while they were too light for more than a couple warm days last week i figured they can use all the coats they can get once they go back home.

So the day we gave them the fleece jackets it was near 60 and that was actually all i sent them to school in. But then the next day was 40 and windy so i told them they would have to wear coats. They wanted to wear the jackets again so i bargained. I told them they could layer...so if they wanted to wear a long sleeve t-shirt and the fleece I was cool with that. BUT they still had to wear a coat to school.

So the next morning i come downstairs and they are both wearing their fleece
so i say ok guys get your stuff...meaning bags, lunches, coats. Im get my stuff and turn around and they are both standing there with just their bags. Coats people...i need coats.

The next morning i come down and Captain Energy has on a long sleeve shirt, a hoodie and his fleece. Looks ridiculous. So i tell him he's going to need to take one of those off. Why? Cause you have to wear a coat. I'm wearing a coat. Uh...no...youre wearing a ridiculous combination of jackets. My frind says this is my fault as after all I did say he could layer.

Morning 3...I get Captain Energy to put his coat on and i turn around and Mr. Grumpy Pants is standing by the door in just fleece. Seriously people. That morning i had enough and I told them that at no point from here on in will they NOT need a coat...and it has to be WORN. Some mornings they try to carry it to the car defeating the purpose as my car stays outside..duh!

Morning 4....Mr. Grumpy Pants winds up with his coat on but Captain Energy is standing there with no coat...holding his fleece...back pack on. So i tell him you need a coat. He proceeds to take his back pack off and pull out his coat...puts the coat on and then the back pack. He's still holding his fleece. Im LATE at this point. So i say put the fleece on the couch. No i want to take it. Ok...if youre not wearing it then youre not just carrying it in...youll lose it between the car and the classroom. So he then proceeds to attempt to take the back pack off so he could take the coat off to put the fleece on and then put the coat back on and then the back pack. Uh...no. Fleece not on, it stays home! That morning i told them they have to have EVERYTHING on they are wearing to school when i come downstairs or you can't take it.

This morning....Captain Energy is standing in the kitchen with his back pack on and JUST HIS FLEECE. I say...you need a coat. Im wearing a coat. NO YOURE NOT. Now I tell them we have gone over this for a week. A WEEK. Next time either of you pulls this the fleece is mine. Then I go...its 12 outside. 12! Tweet
Posted by Word Girl at 7:35 PM 1 comments