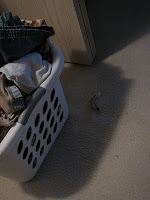 I have the most random shit show up in my house now. This feather showed up out of no where...I'm assuming it was in a pocket. Tweet
Posted by Word Girl at 9:14 PM 0 comments

is that a banana in your pocket? 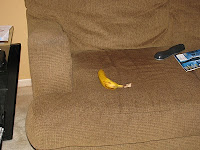 I found this after everyone left the other morning...I have no idea why it's on my couch. Tweet
Posted by Word Girl at 9:11 PM 0 comments

Captain Energy is popular with the ladies. He has an addition on his bike that makes it sound like a motor bike revving when he turns it. The girls stand up on the end of the cul-de-sac and he 'revs' it when he drives by and i here them giggle 5 houses down. Tweet
Posted by Word Girl at 8:58 PM 0 comments

yet another rogue sock 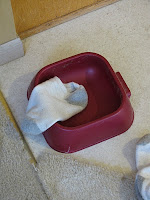 another one bites the dust

Captain Energy had this action figure for only two days before he launched it 2 stories in the air onto my neighbors roof. He asks about every 5 days if we can go see if "mohawk guy" has fallen off the roof. 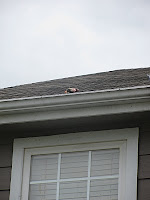 cause ive got one hand in my pocket

I heard Alanis Morissette on the way home and thought of you. You bought me the Jagged Little Pill CD the day it came out. You gave it to me that night I got stuck walking 2 miles to a gas station so I could call you to come pick me up after my piece of shit Ford broke down for the 80th time.

I think I'll cry every time i hear bag pipes for the rest of time.

I have to close my eyes still if I'm watching a movie that involves a helicopter crash.

The last time I talked to you, you said I should give parenthood a try cause it was pretty cool. You would have liked the boys. Tweet
Posted by Word Girl at 8:36 AM 0 comments

Captain Energy was in his room on Sunday having a solo dance party. They have a little CD player/radio and they like to listen to The Rock. So i wandered upstairs for one thing or another and i can now hear the music better but every minute or so the music goes quiet...just for a second though. So i wander closer to the room and it goes silent again and i hear Captain Energy say 'bad word' then he turns it back up. Apparently my husband edits his unsuitable CDs for them in the car by turning down the sound as inappropriate words are said...kind of like his own dump button. Obviously radio stations are fairly kid friendly but apparently Captain Energy now believes all stereo listening requires self editing. Tweet
Posted by Word Girl at 9:57 AM 0 comments

Captain Energy is fascinated with my upkeep of my nails. Today he sat and watched while I took polish off my toenails...he thought that was pretty awesome. While he's watching he counts my toes and we then have the following conversation:

Captain Energy has decided he wants my husband to wash him on bath nights instead of me. The husband is a little more laid back in all tasks and so often times both boys take advantage of the situation. Captain Energy requests the husband again last night so I wander into our bathroom to wash my face...they were in the bathroom on the other side of the wall. Apparently no more than 5 seconds after my husband enters the bathroom Captain Energy decides to stand up and then proceeds to lose his balance. He hits the wall so hard i think he's coming through the wall and then based on my husband's response displaces over half the water in the tub onto the floor, wall and ceiling. After he confirms Captain Energy is ok it gets pretty quiet as the husband explains to him how he's worked all day and doesn't want extra unnecessary work like cleaning up the pond that now exists in our bathroom. And because Captain Energy comes from a background of the non-working there is then a conversation about what work is, why we work and what it pays for....including the water that is now on the floor. I'm sure most of the message was lost as soon as the door opened and Captain Energy was on to the next one. Tweet
Posted by Word Girl at 10:25 AM 0 comments 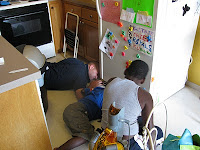 We lost a bouncy ball and hot wheel under the fridge. The Hot wheel was found but even after 15 minutes the bouncy ball was never recovered. Tweet
Posted by Word Girl at 9:22 PM 0 comments 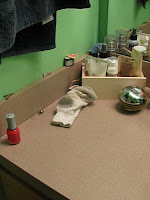 Seriously...why is it there and where is the other one? Tweet
Posted by Word Girl at 9:15 PM 0 comments

Captain Energy and Mr. Grumpy Pants just met the girl who lives around the corner...and therefore so did I. Here is the conversation I just had with her.

What happened to your hand?

Are you their mom?

I'm adopted and my dad is in jail.

If we were only all that forthright... Tweet
Posted by Word Girl at 8:40 PM 0 comments

We're in the grocery store the other day and Mr. Grumpy Pants and I are waiting while jeff and Captain Energy are on one of many pee breaks (apparently lots of energy means lots of pee) and he sees some Axe body wash. He tells me that's the kind of body wash he likes to use. He then asks me if I want to know why he likes to use it. I say sure...although I'm not used to 9 year old boys and I'm not real sure what I'm getting in to at this point. So he tells me to look at the back of the bottle and points to the description. There on the back of the bottle it says that Axe is girl approved. That's right...he's 9. Is it bad I bought him some? Tweet
Posted by Word Girl at 6:07 PM 0 comments

Captain Energy is learning how to tie his shoes. He has technically figured out the how but he is never quite fast enough at it for his own liking and instead wants us to tie them for him. He's never going to learn that way and so I always offer to assist but refuse to just tie them. The longer he tries of course the more he wants to give up ands the more he cries. He gets his loops made but loses track of where to cross everything over and cries out "I can't find the hole." All I can do is sit and try not to laugh. Let's hope he figures that issue out for good eventually. Tweet
Posted by Word Girl at 5:43 PM 0 comments

its a sock thing

Socks have always been elusive. Everyone knows there is never a load of laundry where you wind up with matching socks. I think I have only actually pulled that off twice in my entire life. But I now have two boys who wear the same size socks and they seem to be somehow producing socks while I sleep. On a good day I usually have about 5 socks in each wash that don't match and often times I swear I find socks in a wash I have never even seen before. There's this one damn sock with this green stripe on the toe and I have NO idea where it came from or where its damn mate is.

Aside from my inabilty to match issues these things now show up all over my house. At any given time i usually have a rogue sock on the coffee table, under the kitchen table, in the dog bowl or in the back seat of my car...always just one though. Where's the other one? It's not like i see either of the boys walking around with just one sock on.

Last night I'm laying in bed...laying in a bed i have just made up with clean sheets...and i feel something under the sheets. I don't think much about it but it's kind of annoying me so i get out of bed and pull back the sheets...and yup, you guessed it...it's a rogue sock. Tweet
Posted by Word Girl at 4:55 PM 0 comments

This morning i awoke to a whoopee cushion going off over and over...i suspect it was Captain Energy. Tweet
Posted by Word Girl at 4:54 PM 0 comments

They were dropped off at my door the first time we met them by a driver and i signed for them like i would a UPS package. They had been picked up from homes they had been living at for 10 months by a stranger and brought to our house where they were told they would meet two new people. They walked into my house without hesitation and all i could think of was had that been me at that age I would have been crying. I can not imagine how any child at any age deals with this...how they aren't so broken they can't even function. But they do...they hung out with us and ate dinner and played. The 9 year old even had enough foresight to have an agenda for the meeting. He had clearly been told why they were coming to visit us...that being our house may be an opportunity for the two of them to move back in together. So it was very clear he was scouting us and the place out. Near the end of the visit he said he had some questions. He wanted to know how old we were, he wanted to know if we had bikes they would get to use and he wanted to know if they would get to go to the pool a lot. It was a very small agenda (im sure any 9 year old's is) but it was an agenda none the less and it impressed me he had one. It also made me sad that a 9 year old has been through so much already that he instinctively knows he needs an agenda. At the end of the visit the same driver (now a little less of a stranger) came back, I signed them back over to her and they were taken back to their respective foster homes. At that time they had no idea if they would be coming back to live with us or not. For all they knew they would meet 8 more families just like us before someone said yes. These kids have nothing to depend on but the system. They have to hope the system has made the best decisions in who gets to be a foster family, they have to hope the family they wind up with doesn't have a hidden agenda and they have to hope the system gets them to where they need to be to make it in the end. Tweet
Posted by Word Girl at 10:15 PM 0 comments

Something possessed the husband and I (maybe me more than he husband...he just followed) to tackle the challenge of becoming foster parents and we now have two boys, 6 & 10, living with us. We were not parents before this so we are currently battling the challenges of parenthood but also battling being parents to two kids we just met who came with their own baggage. Some days are a mess and other days are actual disasters but every few days we get something right.

Not only did these two role into our house with their own belongings (so much shit I had to actually get a storage unit) but they also showed up with their own personalities that have been years in the making. Personalities we now have to figure out how to negotiate and entertain and wrangle after only having known them for 4 weeks.

The 9 year old is caught somewhere in an in-between land with one foot in childhood and one foot in adulthood and his mood swings are often and quick. He is demanding and bossy and thinks he knows everything.

The 6 year old has so much energy I'm pretty sure he runs in his sleep.