Next week for work I have to travel to a small town in Iowa...we have offices there. I shared this info. with a friend of mine who has been there and the first thing he says to me is that I'm either going to need to find alcohol early or travel with my own. Tweet
Posted by Word Girl at 5:33 PM 0 comments

1. Good conversation (via text) on a Monday night

3. So You Think You Can Dance (no explanation needed)

4. Discovering that it matters to more than one person if I'm smiling or not.

i don't want to be me

This is not who i signed up to be. And I don't know how to fix that. I think at some point I was on the right track. I wrote a lot in college which led me to a job as a tutor in the college writing center and later a job on the college newspaper. I fell down the path of advertising which i loved because i created. I hung out with the creatives, the writers, the artists. I wrote, I read...I liked being me. My first job allowed me to continue creating and become a part of the Kansas City film scene. I found film and movies and loved it. I loved working in the evenings because I got to see almost every movie released. I saw obscure films, met local film makers and kept up on the local scene.

Then I got drug into jobs I thought would let me continue to be this way, i was put in charge of more, they gave me more money. And in the middle of it all I lost me. I found a small pocket of time where I met a bunch of cool, creative artists and I thought I was finding me again. Now they have dispersed and I can't get back to me.

I'm sad or mad all the time. I try to play that I'm ok...but that person isn't in me. I'm an asshole to my friends, I'm grumpy and apparently have just quit smiling. I pick fights and don't play nice. And I'm beginning to wonder why anyone wants to be friends with me anymore.

I have to find my way out before I suffocate. Tweet
Posted by Word Girl at 5:07 PM 0 comments

1. Discovering my recycling efforts have reduced my waste to just 1 bag of trash a week.

2. The Lion King on a Wednesday night.

3. An unexpected free lunch on Friday.

4. Spending Friday evening with the coolest person in my life right now.

I got caught up in my head this weekend due to many different things but I ultimately broke because of issues with some friends. I had already had my feelings hurt by a good friend...and that one I just had to figure out how to forgive as that's what you do with best friends. But on top of that all my other friends started being crappy too and I spent a lot of the weekend in bed.

My husband is pretty good about letting things play out with me...he knows by now how I process stuff and knows I'll always come back around. But after an entire weekend of moping and crying, he asked me if he could talk to me for a minute while he showered. Now keep in mind my husband is a man of very few words. But he made me sit and listen as he told me that I could not expect extraordinary acts from ordinary people. He told me that my problem lies in the fact that I am an extraordinary person and expect the same in return. But when I am dealing with just ordinary people that's not gonna happen. He made me list who my ordinary and extraordinary friends were...and then told me to keep that in mind next time I got my feelings hurt. Tweet
Posted by Word Girl at 10:12 PM 0 comments

1. Discovering I'm the person one of my best friends wants to confide in.

2. The look on my AD's face when my catalog keyline came back with very few edits.

5. Golf on Sunday morning with some REALLY good friends (I beat my husband on one hole and his best friend on another!) Tweet
Posted by Word Girl at 5:51 PM 0 comments

While traveling last week I had a bloody mary at the san diego airport, by myself at 10:00 AM. Tweet
Posted by Word Girl at 5:37 PM 0 comments 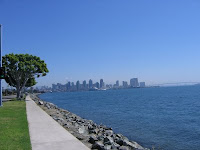 I did two firsts last week. I got to travel for work and i traveled alone. And oh my god it was a blast. I wound up eventually hooking up with two other co-workers once I got to San Diego, but the traveling was done alone and the I spent time in the hotel room was alone. I like being alone. And I know this may sound stupid, but I like the fact that I can get myself half way across the country all by myself. Observations along the way:


Its tricky to keep track of your shit when its just you...I'm use to being able to juggle stuff with the husband.

It's nice to only have to keep track of yourself.

The iPod is a wonderful invention.

A half full plane is a great thing.

Always travel with someone who knows how to expense alcohol.

Always eat seafood when you're on the coast.

I envied the waitress who said she surfs everyday.

There are people who are way more indecisive than i am.

The sky is always bluer in California.

Carl would have gone to Tijuana...I kind of wish i had.

I wonder who exactly travels to Las Vegas alone.

Even if you're just stuck in the airport in Vegas...Vegas is still fun.
Tweet
Posted by Word Girl at 5:24 PM 0 comments