welcome to the bible belt 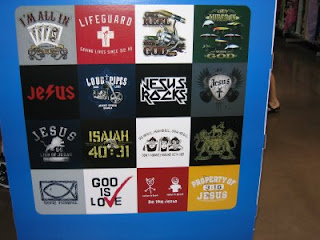 These are t-shirts that you can buy at my local Target. 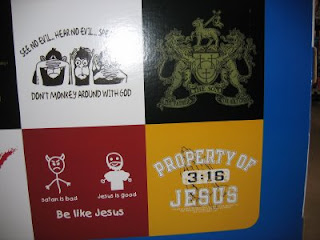 A friend of mine told me the other day I don't let myself smile enough. And I got to thinking about how easy it is to focus on all the bad crap and forget about the good. So I've decided to start wrapping up the week with a list of good things that happened. I figured 5 was a good number.

1. Kid Rock on the VMAs (he will always rock)

2. Someone asking if my $10 shoes from Target are Gucci

3. Dilly bars on a Thursday afternoon

but I want something so bad right now that sometimes it knocks the wind out of me. The problem is I'm not supposed to want it. Tweet
Posted by Word Girl at 11:35 PM 0 comments

middle of no where

I tell myself that I want to live in a big city, that I want to live someplace different. But I honestly think I have found my own private heaven in the middle of the country, just 30 minutes from a city I hate most (the city I grew up in). This is the place where people actually look you in the eye and say hi., where college boys flirt with girls who are WAY older than they realize, where kids actually behave, where it still gets quiet at night, where you can still see the stars.

walking is not an option

Today's 4 mile run is brought to you by the following play list:
Pitbull - Go Girl
Avril Lavigne - Girlfriend
Timbaland - Oh Timbaland
Fall Out Boy - Beat It
Jordin Sparks - No Air
Low Stars - Calling All Friends
Jamie Lidell - A Little Bit More (favorite lyric: "it got so complicated after we touched each other")
Saul Williams - List of Demands
John Mayer - Say (favorite lyric: "in the end its better to say too much than to never say what you need to say")
Estelle - American Boy
Madonna - 4 Minutes
Busta Rymes - Put Your Hands Where My Eyes Could See

Sites seen:
3 crickets dying...but still kicking
2 kids heading to a slumber party (they probably waited all week for that)
A birthday party
A bird's head (yup, just the head)
A young boy kind enough to move his parked bike out of my way
A large, very hairy spider (it was dead, but if he had still been kicking he surely would have given me a run for my money)

Running is one of the only times I can just exist as me and not think about fighting, divorce, cancers, work, what i want but can't have, money, dying. Tweet
Posted by Word Girl at 11:55 PM 0 comments

can change a million after it. Tweet
Posted by Word Girl at 11:54 PM 0 comments